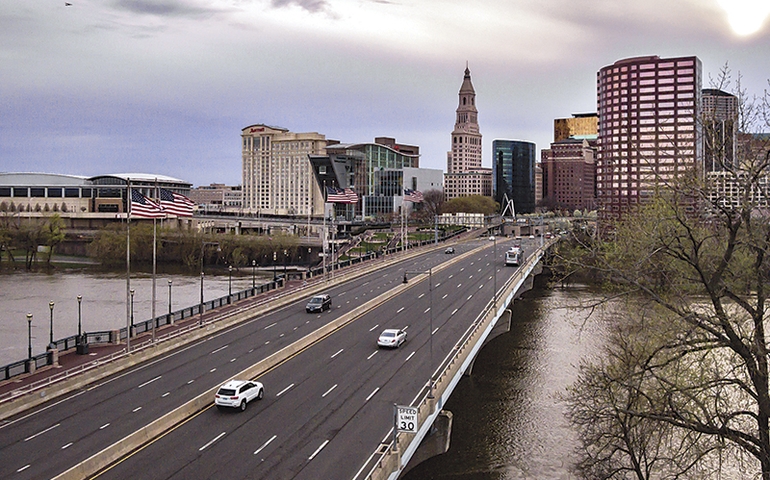 The summer is often a time for light reading, preferably on a sandy beach away from the hustle and bustle of work life.

But instead of providing our readers with fluffy features this summer, Hartford Business Journal set out to cover and explain a thorny, complicated and important issue that will directly impact the future fortunes of the city and state: Hartford’s exorbitant and broken property-tax system, which has been a major drag on economic growth.

Over four weeks starting in late June, HBJ published a series of in-depth stories that laid out in stark terms how Hartford’s high and unequal property-tax system has sapped economic growth. More importantly, we also laid out some ideas on how to solve, or at least alleviate the problem.

We presented our five “solutions” based on interviews with dozens of policy, economic-development, business and other experts.

What did we conclude?

There are no silver bullets for solving the tax and financial issues Hartford faces. Oz Griebel, former CEO of the MetroHartford Alliance, probably offered the most realistic analysis, arguing that the only way for Hartford to reverse course is through a grand bargain among the state, city, property owners and others.

He’s right, but of course the devil is in the details. Most likely everyone’s ox must be gored in order for a sustainable, long-term solution to be achieved, and that’s not always a politically expedient path to take.

However, there is no better time to discuss this issue than during a mayoral election year.

Hartford voters will be choosing their next mayor this fall, and all candidates should be talking about how they intend to reduce the city’s exorbitant property-tax rate and promote economic growth.

Based on our own reporting, I’ve outlined a strategy I think may be the best blueprint to make that happen. It’s culled from my own ideas as well as thoughts shared by many others.

Is it a perfect plan? Admittedly no, but it could offer a starting point to a conversation that must and should be had.

For those who didn’t follow our series this summer, or simply in need of a refresher, here’s some background on the scope of the problem.

At 74.29 mills, Hartford’s property-tax rate is by far the state’s highest and among the nation’s highest. In fact, the effective property-tax rate for a commercial landlord in Hartford (over 5 percent) is higher than what New York City, Boston and Chicago landlords face.

That’s stifled economic growth in the city — Hartford’s $4 billion grand list is valued 30 percent below what it was near the turn of the 21st century, and 38 percent below its 1990 peak of $6.5 billion.

By comparison, neighboring West Hartford — one of the region’s wealthier communities with half the population of Hartford — has a 41 mill rate and $6.3 billion grand list. (To calculate property taxes one must multiply the mill rate by a property’s assessed value and then divide by 1,000.)

With limited exceptions, private development has eschewed Hartford over the last decade or longer, unless it’s been supported by state government subsidies or city tax breaks.

And for anyone who thinks commercial taxpayers will soon get relief after the state last year helped the city avert bankruptcy by agreeing to pay off Hartford’s $550 million in general obligation debt over the coming decades, think again.

Despite its bailout, Hartford’s finances remain in a precarious position, and commercial taxpayers aren’t likely to see a tax-rate reduction anytime soon, according to Mayor Luke Bronin.

In fact, 59 percent of the assessed real estate in Hartford is exempt from taxation because it’s owned by governments, nonprofits, churches or other tax-exempt organizations. State government reimburses the city for some of its tax-exempt property, but it doesn’t come close to filling the gap.

Meantime, Hartford is also home to one of the poorest populations in the country, increasing the need for social, health care and other services.

Adding insult to injury, Hartford has the state’s only bifurcated property-tax system, in which commercial property owners pay a higher tax rate than residential homeowners.

The simplest and clearest path to reversing Hartford’s economic fortunes is to choose a competitive mill rate and adopt it over a relatively short time period.

That would need to be done in close coordination with the state, which is currently overseeing the city’s finances following the 2018 bailout agreement, and potentially bondholders.

Mayor Bronin has said the city’s mill rate must be cut in half in order for it to be competitive. But there is no realistic plan in place to make that happen. Hartford will never experience enough of an economic boom to grow its grand list to such an extent that it allows the city to considerably lower its mill rate and be competitive in attracting unsubsidized private capital.

So instead, a grand bargain, as Griebel suggested, must be hatched. The city, state and Hartford property owners should agree to gradually lower the city’s mill rate to a more competitive level — say 45 or 50 mills — over a five- to 10-year period.

Collectively, a group of stakeholders — including city and state lawmakers, property owners and business leaders — would figure out how to fund city government based on that new mill rate.

Business owners and leaders, including those who don’t actually live in the city, would get a seat at the decision-making table. Some might look askance at that notion, but the truth is, employers — including many of the large corporates — fund a significant percentage of Hartford’s budget via property taxes and deserve a voice in the discussion.

The city’s largest taxpayers — including Eversource, Travelers, The Hartford, Aetna and others — should agree to maintain their current level of tax payments for at least the next five years, in order to lessen the financial blow from lowering the mill rate. (This was an idea Griebel pitched.)

The residential assessment ratio should also correspondingly increase to get it more in line with the commercial tax rate. I’m not saying we should equalize them, but decide on a more fair rate and get there in five to 10 years. For example, raise the residential assessment ratio to 45 or 50 percent in five years and leave it there. That should help offset some of the lost tax revenues from lowering the mill rate, while also not completely soaking homeowners with higher costs.

The city and state together will need to figure out how to fill in the remaining gap to fund the city’s budget. I’d urge further cost cutting, but there’s likely not too much left to cut in city government spending.

Bronin has said there is not “$50 million or $100 million to responsibly squeeze out of city government,” and I believe him. He’s even gotten some praise from conservative thought leaders for taking a tough approach on city spending. However, more efforts to regionalize city services should be required, not just encouraged.

Local-option taxes should be on the table. Hartford is a commuter city with over 100,000 suburbanites driving in and out of the city each weekday to work but not live here. A local meals tax, for example, would allow the city to capture more tax revenue from those commuters.

There are other remedies that should also be looked at, including requiring the city’s largest not-for-profits, including hospitals and colleges, to make more of a financial contribution. In addition, the city should put a moratorium on granting tax-exempt status to properties, no matter if they are acquired or built by hospitals, churches or other nonprofit institutions.

Many of these topics are political third rails, but truly changing the trajectory of the city requires brave political leadership. The bailout simply put a Band-Aid on Hartford’s many wounds.

In fact, one could argue with a 74.29 mill rate, Hartford is essentially still a bankrupt city because that tax rate isn’t sustainable.

No matter what, all stakeholders should be asked to give a little in order to put the city on a stronger long-term path.

The summer is often a time for light reading, preferably on a sandy beach away from the hustle and bustle of work life.