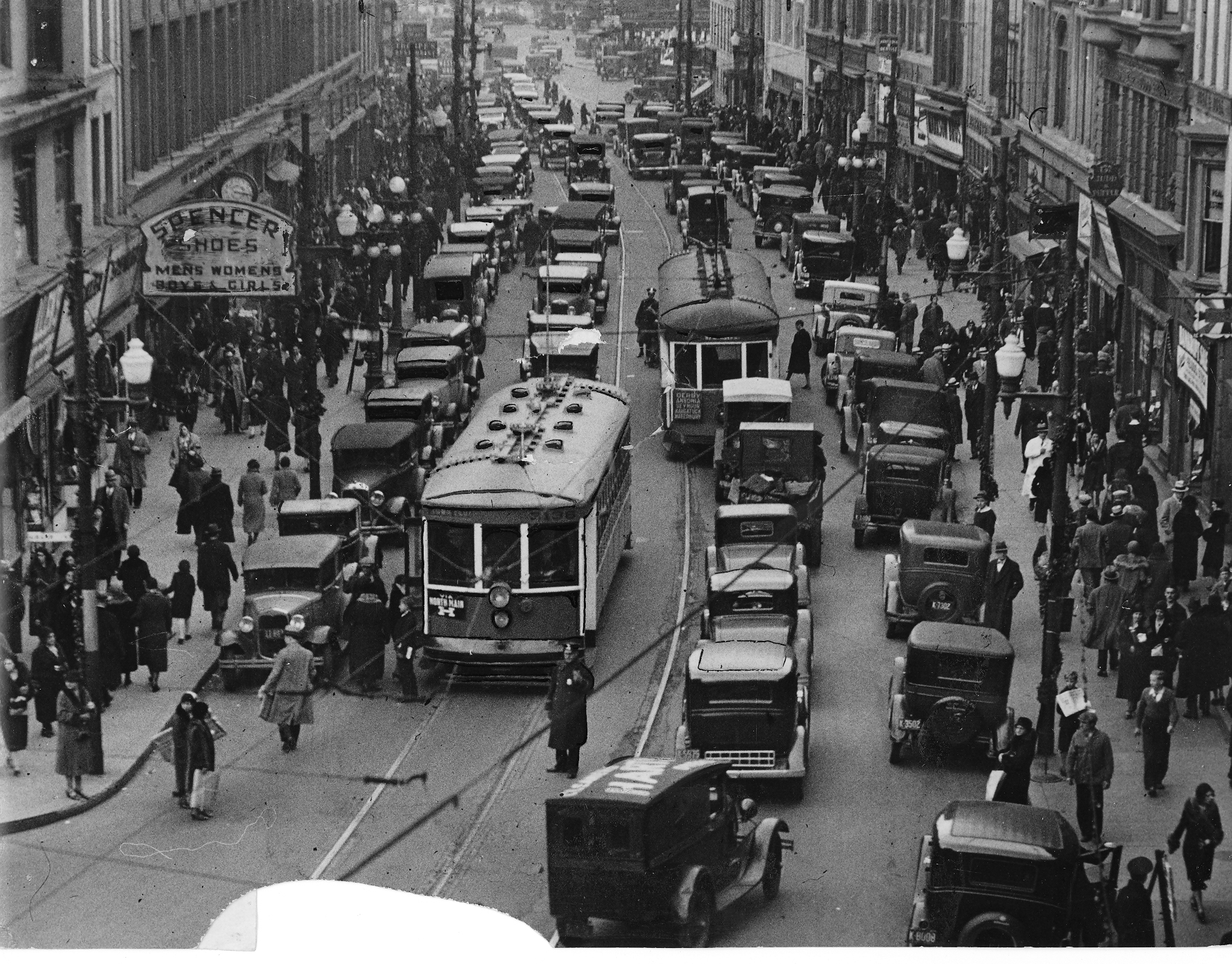 A Time For Cities 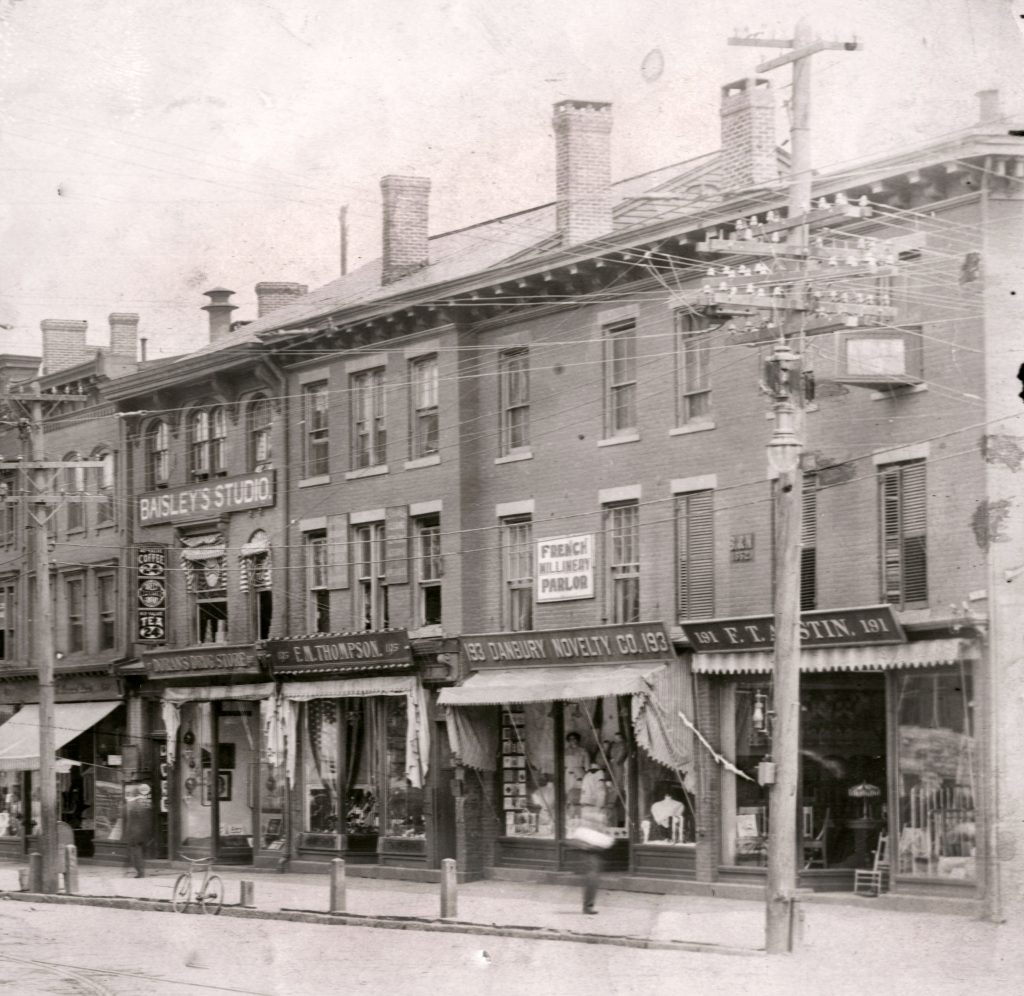 This stretch of Main was referred to as The Thompson Block. On the second floor of number 197 Main, notice Baisley Studios. Frank Henry Baisley was a hatter in his younger life before getting into the photography trade. He had a studio in New Rochelle, New York before he came to Danbury to conduct business. At one time, he took pictures for the International New Reel Company and he was the official photographer at the Danbury Fair. Many of his photographs of Danbury survive today in the archives of The Danbury Museum & Historical Society. Photo Courtesy of Danbury Museum and Historical Society

Connecticut’s cities were the glories of their time. Handsome and self-reliant, well-built and functional, they were economic dynamos, often known by the products they made: The Hat City, Brass City, Silk City, etc.

These cities made the state strong.

And then the U.S. won World War II. Many cities hit their population peaks just after the war, and then began a long decline. The pre-war trickle to the suburbs became a torrent (of whites), on new highways that wrecked city neighborhoods.

Most of the heavy industries closed or moved away, leaving many employees in the lurch. The state was left with a pattern of wealthy suburbs surrounding poor central cities. Since the 1950s, these cities have relentlessly tried to revive themselves, with mixed results.  By and large, they are still poor.

But there is a new interest in cities, from young people, entrepreneurs and others, and a new federal program aimed at promoting investment in distressed areas. Connecticut must take this tide on the flood. Reviving the state’s distressed municipalities can bring more opportunity and a stronger economy, and should be a top priority.

At least we think so.

We will look at renewal efforts of the past and present, examining what worked and what didn’t. We will look at factors that inhibit revival — tax inequities, zoning, transportation and others — and look for ways to overcome them. We will travel to cities in other states that are dealing with the same issues Connecticut cities face, to compare notes and see if there are ideas that might be useful here.

And we will pay particular attention to the challenge of inclusive recovery — how a city can share downtown prosperity with struggling neighborhoods, and build a local economy that provides opportunity for all residents. This is a national issue, impacting cities such as Pittsburgh and Baltimore as well as Hartford and New Haven.

A presence on the list makes the community eligible for state assistance in housing, insurance, open space preservation, brownfield remediation and economic development.

The Office of Policy and Management produces a second list, the Public Investment Community Index, of 42 towns, based on per capita income, unemployment, tax capacity and aid to children receiving family assistance benefits. One of the main benefits of making this list is that a municipality can apply for the Enterprise Zone program, which provides tax breaks for businesses that locate or expand in distressed areas. There’s even a third list — of towns that get reimbursed for the tax breaks the Enterprise Zone provides.

Most of the towns on the first list make the other lists. They are the ones that are struggling.

Why is this important? Because distressed cities limit opportunity. For example, Hartford and Waterbury have the highest rates of unemployment in the state, at 5.6 and 5.4 percent respectively, well above the statewide average of 3.2 percent. Also, children who grow up in struggling neighborhoods generally have less opportunity than those who don’t (see The Opportunity Index).

Struggling areas put a strain on local taxpayers and the state. Connecticut’s heavy reliance on local property taxes may have made sense when the cities had large industries that could share the burden, but the loss of those factories puts cities behind the eight ball.  The struggling cities have the highest mill rates and lowest per capita incomes, with few exceptions.

Perhaps not surprisingly, cities that aren’t moving ahead are falling behind. A  2018 Brookings study, which found that “the lion’s share of growth in the last decade has been concentrated—with relatively few exceptions—in a small cohort of urban hubs while the rest of the country has drifted or lost ground.”

That said, walk through downtown Hartford or New Haven. As with cities across the country, there are feet on the street, new homes, signs of new life. Young adults like the excitement and animation of cities and have little interest in spending hours in commuter traffic. Young entrepreneurs and new industries are clustering in urban areas, as they did in the first age of urbanism.

This is vitally important. According to a 2011 Brookings Institution study, metropolitan regions are carrying the economic development load for nearly every state, including Connecticut. The metro regions work better with prospering cities at their core.

And, as climate change becomes painfully obvious, cities offer a density that can lessen carbon emissions from the transportation and building sectors, the major sources of greenhouse gas emissions.

Finally, the 2017 federal Tax Cuts and Jobs Act created the Opportunity Zones program to spur investment in economically distressed census tracts. Opportunity zones reduce capital gains taxes for individuals and businesses who invest in qualified opportunity zone. Connecticut has designed 72 tracts in 27 communities for the program. We will take a close look at the program as it is rolled out this year, to see if it shows more promise than some of the many earlier efforts at place-based revival.

Let’s make this a time for cities.