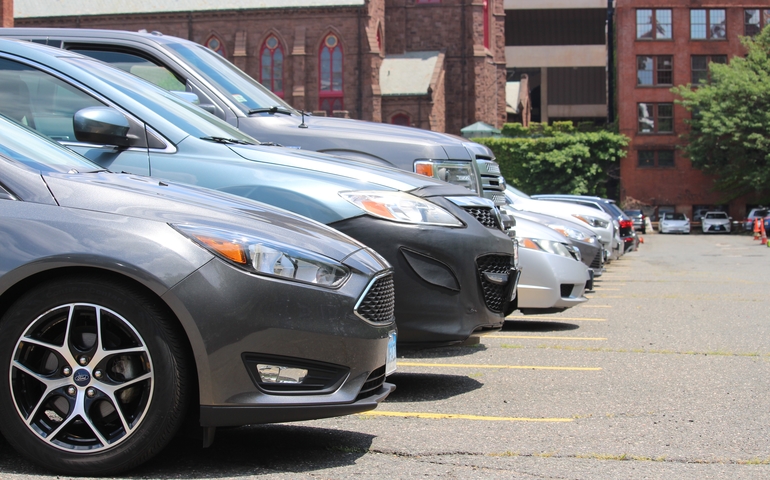 A proposal a few years ago to begin taxing land in Hartford at a higher rate, while assessing a separate, lower tax on property (a land value tax) was dropped after it failed to gain momentum.

But there is some sympathy for the idea that surface lots in the city are undervalued and under-taxed.

“[Parking lots are] not being taxed based on an income-based model, they’re being taxed on a vacant land model,” Freimuth said. “And the reality of life is the parking lots are probably not paying a full tax.”

CRDA is currently involved with parking-lot redevelopments in Hartford’s Downtown North neighborhood and near The Bushnell Center for the Performing Arts. Freimuth said parking lots’ income streams should be factored into their assessments, in order to put their property taxes more in line with their true economic value. That would make parking lots with high average occupancy rates more valuable.

But, does Freimuth think a land value tax would spur development?

“School is still out,” on that, he said, adding that Harrisburg, Penn., has been a leader in experimenting with the tax, which has had some initial positive impact there.

Harrisburg adopted in 1982 a tax rate on land that was four times the rate on buildings, which helped decrease the number of vacant structures there over time, according to a recent report by Strong Towns.

There are, however, other examples of Pennsylvania communities that adopted but then scrapped the tax.

“Theoretically, you don’t want to discourage improvements to real estate and therefore want a lower tax on new construction than on the land itself,” Freimuth added. “When it comes to parking lots, this becomes a much more poignant argument. Why encourage surface parking at the expense of residential and commercial uses that provide greater economic impact?”