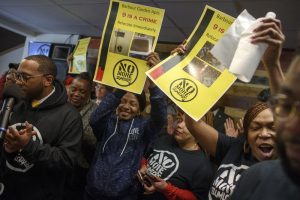 In February, Reverend A.J. Johnson, left, and residents of Barbour Gardens chant “No more slum lords,” while meeting with the press to highlight HUD’s announcement that the residents are to be relocated. (Mark Mirko / Hartford Courant)

The Housing Code, proposed by Mayor Luke Bronin, would work to correct and prevent neglect in city rentals by imposing new licensing schedules and fees — including regulating hotels and group-living homes ― and adding language about air quality, mold, lead and infestations.

It would also lift the veil that corporate ownership offers so many dwellings in Hartford, requiring for the first time the names of every owner and operator, including every general partners of a partnership, members of a limited liability company and officers of a corporation.

Out-of-town owners would also be required to provide a residential address, not a P.O. box, and a copy of their driver’s license of other ID.

In a letter to city council, Bronin said much of the housing in Hartford is aging and run-down, and “the adoption of a new code cannot legislate away the very real, practical and costly challenges to improve the overall quality of housing.”

What it can do is set specific requirements about environmental and safety hazards, enhance enforcement for violations, generate more revenue, and break up “property ownership schemes that obscure the identifies of responsible parties,” Bronin wrote. 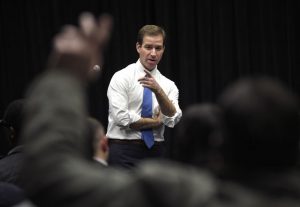 “To ensure that we are making sound decisions, the application process will become more rigorous, closing loopholes used by property owners seeking to hide their identities, and requiring various certificates, reports and proof of insurance.”

Along with weaknesses in current housing ordinances, the city is hamstrung by two vacant housing inspector positions. This week, the city did not respond to questions about the staffing of the housing department, but according to City Councilwoman Wildaliz Bermudez, those positions have not been advertised since 2015.

With the support of Councilwoman rJo Winch, Larry Deutsch, Claudine Fox and Bermudez, all members of the Working Families Party, sought to add one more housing inspector position to next year’s budget, at a cost of $132,000. The resolution, which would have taken money from detention services, failed at a May 15 meeting.

“Pretty concerning that here we’ve been consistent, saying that we as a city are against slumlords and we need to do everything that we can to have more inspections and more accountability for those who are not following housing code, and yet we have not posted for these positions since before the new administration came,” Bermudez said Thursday. “The two don’t connect.”

Since last spring, four federally-subsidized housing developments in North Hartford have had their contracts canceled with the U.S. Housing and Urban Development department over a failure to remedy poor conditions.

All of those developments — Clay Arsenal Renaissance Apartments, Windsor on Main, Infill I, and Barbour Gardens — were owned by limited liability companies.

In the case of CARA’s owner, Ah Minh Holdings LLC, it was clear that the responsible party was a New York man named Emmanuel Ku. However, he used a network of 28 “strawman LLCs” to shield himself from liability as he operated about 20 housing developments in four states, according to court records from a lawsuit filed against him in Alabama.

In the case of Barbour Gardens’ owner, ADAR Hartford Realty LLC, even the responsible party is unclear. The waters are muddied by shared ownership of that New York-based LLC by seven individuals and four more LLCs, none of whom will admit responsibility for the apartment buildings’ rodent infestations, failing plumbing, broken locks and mold. 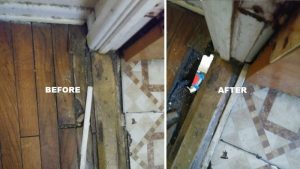 Shanoah Gallup says this hole in her apartment floor at Barbour Gardens in North Hartford was created when she was walking on crutches. Residents of the complex have protested their substandard living conditions. (Handout)

Lack of fire alarm systems in two buildings prompted the Fire Marshal’s Office to file criminal charges against one of the part-owners in April, but the 86-year-old New York lawyer is refusing to appear in court. His attorney argues that the man owns less than 1 percent of Barbour Gardens, and controls nothing.

The State’s Attorneys Office is using an operating agreement for the property to untangle the mess ahead of his next court date, June 4.

The city’s proposed Housing Code would force applicants for new licenses and renewals to provide information about who the actual owners are on the front end. It would also empower the city to request that information from current owners who are hit with multiple housing violations.

State lawmakers are considering a bill that would specifically allow municipalities to require those details. In the case of subsidized housing projects, owners would have to provide a residential address of each controlling participant, or an individual who exercises day-to-day financial or operational control.

The measure was inspired by Hartford’s rash of ousted slumlords, who owned more than 300 units of failing housing until tenant and community protests helped pressure HUD to intervene. Most residents of Barbour Gardens and Infill I are still waiting for relocation to clean, decent units.

A.J. Johnson, a community organizer with Christian Activities Council, said it’s past time that elected officials get a handle on housing hazards and the owners who fail to fix them. Residents have been pushing for action against their landlords for more than a year, and the new housing code is a credit to those efforts, he said. 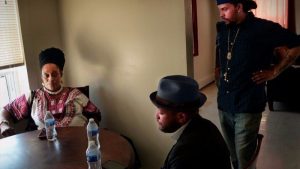 In May 2018, Hartford residents battled with the absentee landlord of their Clay Arsenal Renaissance Apartment buildings, which were in terrible shape. Here, left, Teri Morrison, of 62 Albany Ave., and Josh Serrano, of 24 Center St., right, talk to The Rev. A.J. Johnson, community organizer for the Christian Activities Council. (STEPHEN DUNN/special to the Cour / Special to the Courant)

In May 2018, Hartford residents battled with the absentee landlord of their Clay Arsenal Renaissance Apartment buildings, which were in terrible shape. Here, left, Teri Morrison, of 62 Albany Ave., and Josh Serrano, of 24 Center St., right, talk to The Rev. A.J. Johnson, community organizer for the Christian Activities Council.

In May 2018, Hartford residents battled with the absentee landlord of their Clay Arsenal Renaissance Apartment buildings, which were in terrible shape. Here, left, Teri Morrison, of 62 Albany Ave., and Josh Serrano, of 24 Center St., right, talk to The Rev. A.J. Johnson, community organizer for the Christian Activities Council. (STEPHEN DUNN/special to the Cour / Special to the Courant)
“People are living in really, really bad conditions and residents need some change,” Johnson said. “Hartford isn’t going to change if people can’t live comfortable with their children, feel comfortable coming home and calling it home when you have mice and vermin living with you, can’t even call your landlord because you don’t know who it is.”

Under the code, a license would be required to operate buildings of three or more housing units. The formulas for licensing fee vary by type of dwelling. It would cost an owner $160 to apply for a license for a three-unit building, $3,000 for a 40-unit building, with lower fees for income-restricted affordable housing.

Hotels would also faces licensing requirements, with fees of $4,600 for a 50-unit property, or $1,750 if the hotel is exempt from income tax liability.

Residential licenses would be good for up to four years, while hotel, group-living and rooming house licenses would last one year. Under the current code, and state law, owners are required to pay $25 every time a unit is vacated.

It also asks owners to refrain from installing carpet to help prevent mold and symptoms of allergies and asthma.

“Overall, and over time, the Code will benefit the owners of housing by promoting improved housing quality, which will in turn improve property values that safeguard the investment property owners have made in the city,” Bronin said.