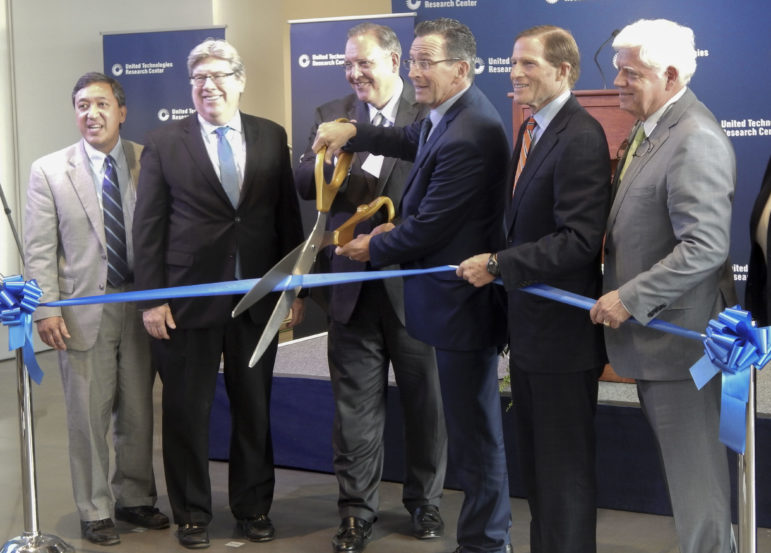 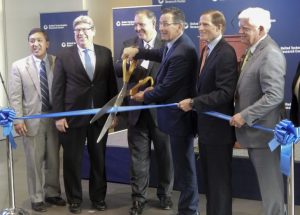 The relief was palpable in some quarters when United Technologies Corporation offered no ugly words about Connecticut as the aerospace conglomerate announced plans to pack up its C-suite for a move to the thriving economy of greater Boston, the home of its merger partner, Raytheon Co., and another recent Nutmeg expatriate, GE.

“It’s not like they are moving their corporate headquarters and taking a parting shot at Connecticut. They are not doing that,” said Senate Majority Leader Bob Duff, D-Norwalk. “They are making a business decision.”

So, in other words, the best face to put on UTC’s decision was that it was running towards Massachusetts, by far New England’s leader in jobs recovery since the 2008 recession, and not away from Connecticut, the region’s laggard.

That interpretation, of course, raises its own questions and concerns.

“We have two economies, Massachusetts and Connecticut, that appear to be so homogenous in many ways,” said Donald Klepper-Smith, an economist. “Why is it that the jobs recovery is 340 percent in Massachusetts, while Connecticut is stuck at 81 percent? You could probably write a doctoral thesis on that.”

The comeback of cities and fall of suburbs was one answer posited in a string of articles in Slate, The Atlantic and Governing in 2017. Two had headlines asking questions:  “What on Earth is Wrong with Connecticut?”  and “How Did America’s Richest State Become Such a Fiscal Mess?”

Democratic lawmakers and Gov. Ned Lamont’s economic adviser agreed this week with the basic thrust of those pieces: Connecticut was the beneficiary of New York City’s rampant crime and brush with bankruptcy in the 1970s, and it is the loser as employers see cities as magnets for hiring millennials and tech talent. New York is drawing corporations back from the suburbs, and Boston has reasserted itself as a technology hub.

David Lehman, the former Goldman Sachs partner who is Lamont’s economic adviser and the commissioner of the Department of Economic and Community Development, said this means, among other things, that Connecticut has to invest in its cities.

“The environment we need to create in the state is one that can compete with Boston in terms of culture, livability,” Lehman said. “We have significant talent, workforce-wise, but we have to make sure Connecticut is as attractive a place as Boston to live work and play, so employers are going to want to be here and employees are going to want to work here. And that is the goal for us.”

The administration sees improved transit and highway infrastructure as crucial to making the cities more attractive, but it has yet to articulate a broader urban agenda, leaving some mayors to wonder about its commitment.

Hartford has expanded its downtown housing stock with gap-financing from the quasi-public Capital Region Development Authority, which also operates the aging downtown arena, the XL Center. But Lamont wants to limit borrowing, which could hamper further housing development and the modernization of the XL Center.

Lamont has identified highway tolls as his choice for the best way to finance transportation improvement, an issue he hopes the legislature will address in special session. The first meeting of legislative leaders and the governor about the special session is tentatively scheduled for late next week.

“We’re doing all we can, I think in terms of job creation, economic development, investing in education. The problem we have is that if a company really wants to be in a city of 600,000 people, that we can’t match,” Looney said. “We are handicapped by that every day, I think in terms of marketing ourselves. It was probably less of a problem in the era when corporations were looking for the leafy suburban campus. Those, we could offer plenty of.”

Klepper-Smith and Republicans see the state’s economic policies as also playing a role, specifically the passage of a bill raising the $10.10 minimum wage to $15 over the next four-and-a-half years and the creation of a paid family and medical leave program.

“The new developments of the 2019 session will soon deliver a debilitating blow to the economy of Connecticut as the recently passed legislation is soon signed in to law,” said House Minority Leader Themis Klarides, R-Derby.

She blames them on UTC’s impending move to Boston.

“It should not be seen as mere coincidence that a company, employing 19,000 individuals and that has called Connecticut home for almost 100 years, announced over the weekend the departure of its headquarters, and is moving north to Boston, Mass,” Klarides said.

Lehman said the state needs to take a “balanced approach” while weighing the concerns of businesses against the needs of workers. He noted that Massachusetts also has passed a $15 minimum wage law and is implementing a system of paid family and medical leave.

Senate Minority Leader Len Fasano, R-North Haven, said he sees the budget as another blow to the business community.

But Lamont happily quoted UTC’s chairman and chief executive, Greg Hayes, on Tuesday as complimenting the recently passed budget, even while Republicans blamed the move on Democratic fiscal and social policies.

Lamont and Lt. Gov. Susan Bysiewicz are scheduled to meet Wednesday afternoon with Pratt & Whitney workers to talk about the company’s commitment to Connecticut, an event that sounds like a campaign stop. Every time a company moves its headquarters, regardless of the reason, the state has to cope with the public-relations backlash.

The administration wants to reinforce that only 100 of UTC’s 19,000 workers in Connecticut are bound for Boston.

Connecticut has the highest per-capita income in the U.S., one of the most productive workforces in the world, and an admirable quality of life, but those attributes are overshadowed by a chronic inability to get traction on growth and a newer problem — the weekly departure of 428 residents for other states, many of them departing with significant wealth.

The U.S. has posted 19 percent in economic growth in the decade since the recession, while Connecticut has experienced a seven percent decline in its gross domestic product, as measured by the U.S. Bureau of Economic Analysis. (The state has performed better in the last three quarters.)

“The seven percent decline in economic activity is unfathomable to most people when I go out and talk — maybe five percent of the audience knows the number is down seven percent,” Klepper-Smith said.

When he ran in 2010 to become the first Democratic governor in 20 years, Dannel P. Malloy was fond of noting that Connecticut and Michigan were the only two states with no net job growth in the previous two decades. And Michigan, with its faltering auto industry, at least had a good excuse.

It was a stunning statistic that somehow failed to make a significant impression on successive classes of state lawmakers.

Klepper-Smith says he still sees no sense of urgency at the State Capitol to find out why the state has produced no economic or net job growth, even though the state of Connecticut’s economy has dominated the last three elections for governor — and all five candidates on the ballot in 2018 came from the worlds of business, not politics.

In a recap of the recently concluded legislative session, Senate Democrats listed three bills as accomplishments under the heading of “economic competition & fairness.” Two of the three were bills were vehemently opposed by many businesses and supported by labor progressives: the $15 minimum wage and paid family and medical leave.

Republicans say that was tone deaf, and the governor is no better.

“When we have a governor that only talks about paid family medical leave, marijuana, tolls and all the other progressive policies, that doesn’t bode well either for business,” said Rep. Vincent Candelora, R-North Branford. “I hope that we have a governor that has now opened up his eyes and stopped talking in sound bites and starts really looking at how these proposals impact the state of Connecticut.”

Rep. Stephen Meskers, D-Greenwich, a former Wall Street executive who unseated a Republican incumbent last year, said the governor and legislature deserve credit for passing a budget that is balanced and will set aside $2 billion in reserves. The administration has negotiated a tentative settlement with hospitals over tax issues that potentially created a $4 billion liability.

“I think overall what we did in the first session was good, but it was half the job that needs to be accomplished,” Meskers said.