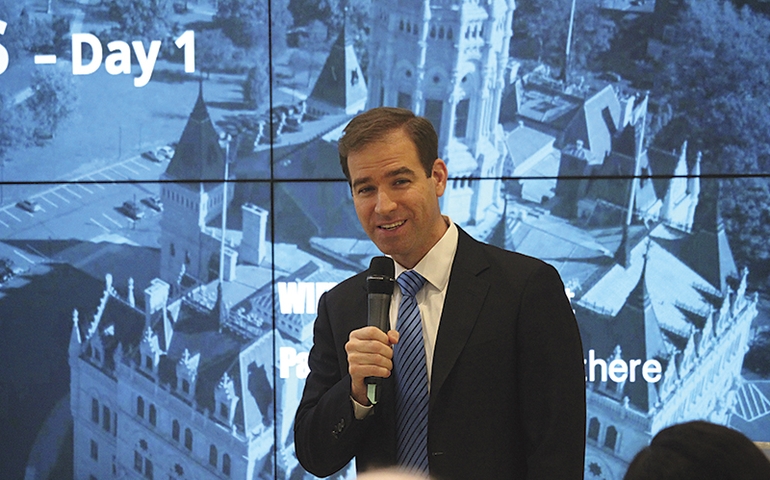 What about city spending?

In this second week of our series, most of the ideas explored as potential ways to shore up the city’s finances and lower the mill rate involve raising additional tax revenue or shifting the tax burden from one group to another.

Of course, the amount the city spends on municipal and education services correlates directly with how much tax revenue it must raise from property owners.

So it begs the question: Can Hartford cut additional spending to lower the mill rate in a meaningful way?

While Mayor Luke Bronin admits past administrations have made some poor fiscal choices — overborrowing, promising overly generous benefits and performing ill-advised debt restructurings — he insists that since taking office in 2016, his administration has cut spending “to the bone.”

“There is not $50 million or $100 million to responsibly squeeze out of city government,” Bronin said. “A big part of what we’ve tried to do is restore the confidence in city government by Hartford residents and folks all around the state.”

Bronin has halted new borrowing and entered into tough negotiations with city labor unions. Full-time employee headcount in the city has also fallen.

Between fiscal year 2016 and 2018, city and school staffing levels have fallen 9 percent, with city positions accounting for 68 of the 431 total positions eliminated, according to city financial reports.

Over those same three years, total expenditures in Hartford, including on schools, have fallen nearly 8 percent, or about $80 million.

Marc Fitch, an investigative reporter for the free-market think tank Yankee Institute, whose reporting has generally been critical of both unions and government excess in Connecticut, concedes Bronin has taken a tough approach on spending.

For example, a recently finalized contract with the 172-member Hartford Municipal Employees Association — which went through an arbitration panel — included four years of wage freezes and a shift to a high-deductible health plan, producing estimated savings of $1.3 million within a few years.

One post-bailout example where the city has declined to pare benefits is for non-union workers.

Last year, city councilors took no action on a proposal to shift new, non-union hires to a defined-contribution, 401(k)-style retirement plan, rather than a pension plan.

That drew ire from at least one member of the state-level Municipal Accountability Review Board, which oversees post-bailout Hartford and several other struggling towns.

Meantime, the city council just passed the mayor’s $573.2 million budget for fiscal 2020 that raises spending by $3.2 million, but doesn’t rely on borrowing and keeps the city’s workforce — excluding public-safety personnel — 11 percent below 2015 levels. Notably, since taking office in 2016, Bronin has not increased the city’s sky-high mill rate.

The state’s long-term debt bailout has helped the city hold the line on taxes. Without the $48 million debt payment the state will make on Hartford’s behalf in fiscal 2020, the city’s mill rate would jump to about 90 mills — essentially a death sentence.

Even with the state bailout, Hartford’s budget will be flirting with deficits in the years ahead, unless the city can sufficiently grow its grand list and continue to restrain spending.

One potential cost-cutting stone that’s largely been left unturned is regionalism. During his first year in office, Bronin toured and held public hearings in major Hartford area suburbs urging residents there to support efforts like combining IT services, dispatch centers or other municipal functions in order to save money.

But no local official can make that happen alone. Bronin would need legislative and political support from other towns and at the state level.